Search the Store by Description, Year, Model or
SEARCH BY STUDEBAKER PART NUMBER

When you experience a cable-operated hood release failure it can happen for a variety of reasons of which battery acid corrosion or old-age breakage are the most common. There are ways to open the hood without any damage to the car if you have this problem.

On a 1951 model Studebaker you simply remove the six Phillips screws retaining the left grill and remove the grill. With a flashlight you can look up and see a hole approximately 7/16" in diameter about 2" behind the hood pin. Simply insert your screw driver into this hole which is partially blocked by the release lever and lever it to the left to release the hood latch. This will take less than ten minutes the second time you do it.

On the cable operated Hawk latches these can be simply manually opened by reaching in below the front valence and overriding the cable control.

On Lark models it is not too difficult to override a broken cable if you have about a 15 straight, narrow screw driver. From underneath the car, from off center of the right side of the latch, insert the screw driver to the right of the return spring pin and as far forward as possible and lever the latch left to the open position. This is a five minute operation on an AC-equipped convertible model and is easier on a conventional model.

On early Avanti cars Studebaker made a provision for this occurrence. Inside the fender well directly under the hood latch assembly there is a rubber plug. Remove the plug and insert a short straight blade screwdriver into the lock operating lever. Lever or push the lever towards the center of the car to release the latch.There is a plug provided on both sides of the car to access both latches.

On early Avanti trunk latches that are cable operated, Studebaker made a provision for these also.You will need a 24" straight screw driver and a flashlight. First remove the rear seat shelf cover. The latch has a center release point that has to be turned. This is usually covered with carpet that has a small hole in it that is hard to locate. My advice is to practice this at least once on a functioning trunk latch with a empty trunk. The small bit of carpet can be rolled back for easy access and returned to its proper place for shows. I hide a 24" screw driver diagonally under the drivers seat and it is not visible, but there if you need it. 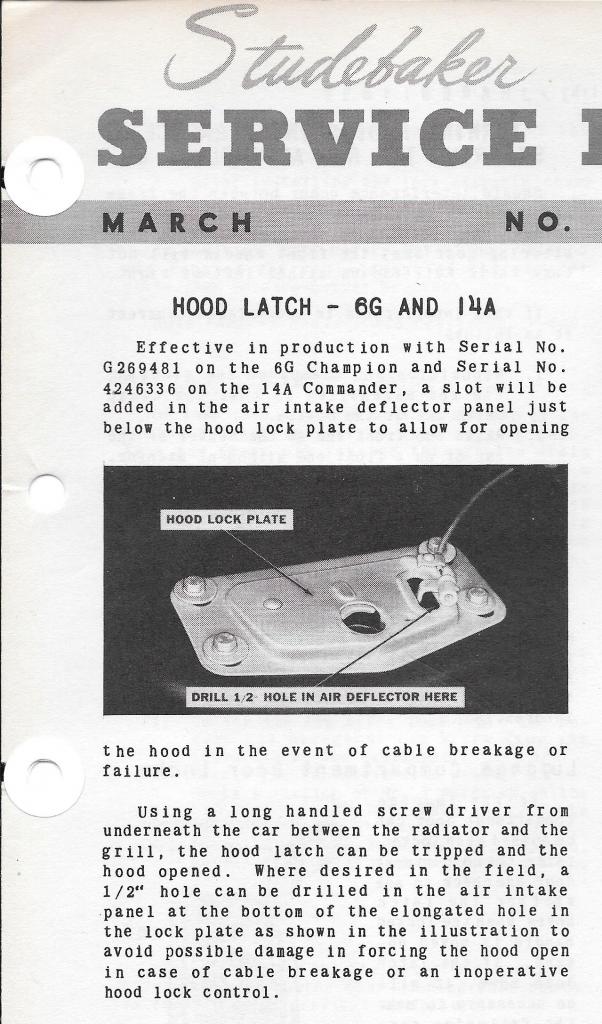