Search the Store by Description, Year, Model or
SEARCH BY STUDEBAKER PART NUMBER

In Seattle, one comes to appreciate the importance of reliable wipers, and lets face it- vacuum wipers are only effective on dry days. After much procrastination and cursing of the rain gods in general, I FINALLY have electric wipers in my 1948 M15A-20.

I basically adapted a Model A Ford/Jeep- type motor for the task. I got mine from Floyds Model A Parts in Ridgefield, WA (360 887 3346). Most Model A vendors should have something similar. My truck is still six volt, so thats what I got. Twelve volt is available as well. The important thing is to buy the type of set-up for a separate switch, NOT the kind with the switch mounted on the back. There just isn't much clearance under an M-Series dash, especially on the drivers side. You will basically need two motors, a push/pull switch, some in-line fuse holders, butt connectors, ring terminals, and some 12 gauge wire.

The motors I bought cost about .00 each, and included an arm and a blade. One thing to remember- the motors will NOT be synchronized. They will be doing their own thing, as will the blades. My motors came with instructions for either positive or negative ground. In the case of positive ground, per the wiring diagram supplied, you ignore the molded symbols on the motor. I also decided to jumper the S (switch) terminal to the ground side, as I did not want the self-parking feature to work.

Since these motors are a universal fit, it was necessary to shorten the outer threaded shaft and the inner shaft by 1-1/8 to get the length shown in the sketch. This is accomplished by removing the shaft cover plate (4 screws), running the outer nut up the threaded shaft, and cutting it to a length of 1-. Clean up the cut with a file and back the nut off to make sure the threads are okay. Then remove the inner shaft from the motor and shorten it by the same amount.

While the shaft cover plate is off, remove the foot shown in the sketch. Reassemble the motors and run wires to the terminals. A couple of feet of wire should do it. Take the original vacuum motors off the truck. Take the inside and outside bezels to a vise and drill them out to 3/8. On the inside bezel, remove the foot and chamfer the hole on the motor side of the bezel.

Time to put it together! Remove the glove box (unless it has already rotted out) and push the motor shaft thru the hole, having first put a rubber washer and the inside bezel on the shaft. Note the motor is on a 45 degree angle. On the outside cowl, slip on the outside bezel, the rubber washer, convex washer, and thread on the nut. Tighten up snugly with a wrench and slip on the outside boot. Repeat the process on the drivers side (an extra pair of hands are required!).

After mounting the motors, mount your push/pull switch. I used the hole left on the top of the dash where the old wiper switch was , but anyplace will do. Run a lead off the ignition switch (that is energized when the key is on) to one side of your push/pull switch. Connect two in-line fuse holders (4A-AGC) to the other terminal and connect one to each motor. Find a convenient ground screw for grounding of the motors and run both ground wires to it.

You are now ready to test all this stuff! Reconnect the battery you already hopefully disconnected, turn on the ignition, and pull the switch. With any kind of luck, it should get a little bit noisy around the vicinity of the dashboard. Alignment of the motors can be can be accomplished by disconnecting one of the motors (by pulling the fuse) and running the other to the end of its travel. Then attach the arm and blade with the clamp screw. This stage can take some experimentation.

Like I said earlier, the two motors are independent of each other , so the wiper action will not be synchronized. However, they will work going uphill under a load unlike the original set-up. Thats the short version of how it worked out for me. The only thing I would do different if I could would be to find quieter motors, if they exist. But what the heck- I can't hear much over the motor/exhaust/wind noise anyway!

Since I put the electric wipers on my truck and have had an opportunity to use them a bit, I have a couple of revisions to make based on my experience.

Instead of using a two position push/pull electric switch to operate the wipers, consider a three position switch (such as a headlight type) to enable you to have just the drivers side wiper going when pulled to the middle position. Both wipers are engaged by pulling the switch all the way out. I have found that often I could get by with just the drivers side wiper in light rain. This cuts down the draw on the electrical system (which is considerable when the headlights and/or heater is on), and is a little quieter. This type of switch also enables you to align the wiper blades when off- one at a time.

I found that the motors themselves can work loose over time, resulting in the motors actually turning instead of the shaft/arm. Its hard to figure out how tight to wrench down the outside nut, as you don't want to strip it. Ideally, the inside bezel needs to be attached to the wiper motor- maybe a pin or screw could be engineered? 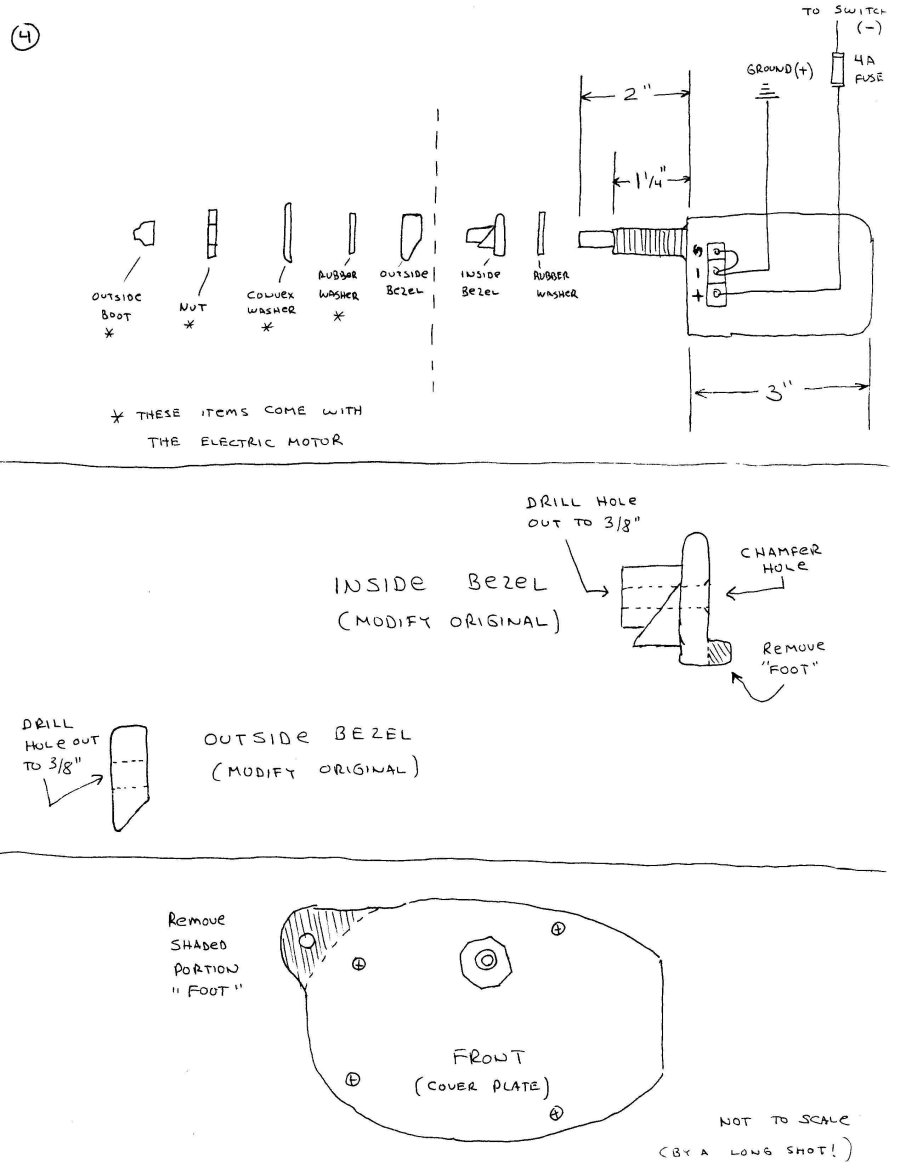